Get the latest Syracuse news delivered right to your inbox.
Subscribe to our newsletter here.

County Executive Ryan McMahon still plans to move forward with his $85 million aquarium project in Syracuse’s Inner Harbor despite lukewarm support from much of the county legislature.

McMahon proposed the project, which would result in the largest aquarium in upstate New York, last year, but it has faced an uncertain future after the legislature refused to vote on it in December. He said the project will bring well paying jobs and economic development to Onondaga county.

“We’re helping revitalize our neighborhood, which will spur more economic activity and more tax base for our community,” he said. “(The aquarium) will really be the catalyst to jumpstart our Inner Harbor.”

But many county legislators on both sides of the aisle are unsure if the multimillion dollar investment would be worth it.

The aquarium would use $85 million from the county’s surplus, and the county would not have to borrow any additional money for the project. A feasibility study found that the aquarium would be financially viable and estimated it would attract just under 500,000 people per year, half of which would be tourists.

Under the plan, the county would build an 80,000 square foot aquarium at Syracuse’s Inner Harbor, just southeast of Destiny USA mall. The structure’s tanks would hold 600,000 gallons of water.

With the county paying for the aquarium in cash, only a simple majority of the 17 legislators need to approve it. The county would have needed a super-majority if it borrowed funds for the structure. Republicans control 11 seats, which allows the party to push the aquarium on its own, though Chairman Jim Rowley is not yet convinced.

“If I were to guess today, (McMahon) needs nine votes to pass this, I don’t think there’s the votes,” he said.

Rowley also said he’s concerned about the feasibility study’s projections, both for the aquarium’s out-of-town visitors and estimated maintenance.

McMahon has also pushed for several other major projects recently, including an electronics manufacturing plant in the region. Rowley said he and other legislators want to know jobs and development are coming to the county through the plant before signing off on the aquarium.

“Anybody can do an estimate and tell you that you’re going to make money every year on this,” Rowley said. “There’s assumptions that go into these numbers.”

Still, he emphasized that the aquarium is not a dead project, and that he has yet to make a final decision on whether it should go forward.

The aquarium will also attract visitors to local businesses, which will help boost the area’s economy, McMahon said. The study estimates the aquarium could bring over $50 million in revenue and 400 jobs locally as well as $30 million and 300 jobs across the state via spending at local business and tax revenues.

“The aquarium will be a high-profile and iconic attraction that will enhance the profile of the county,” the study said. 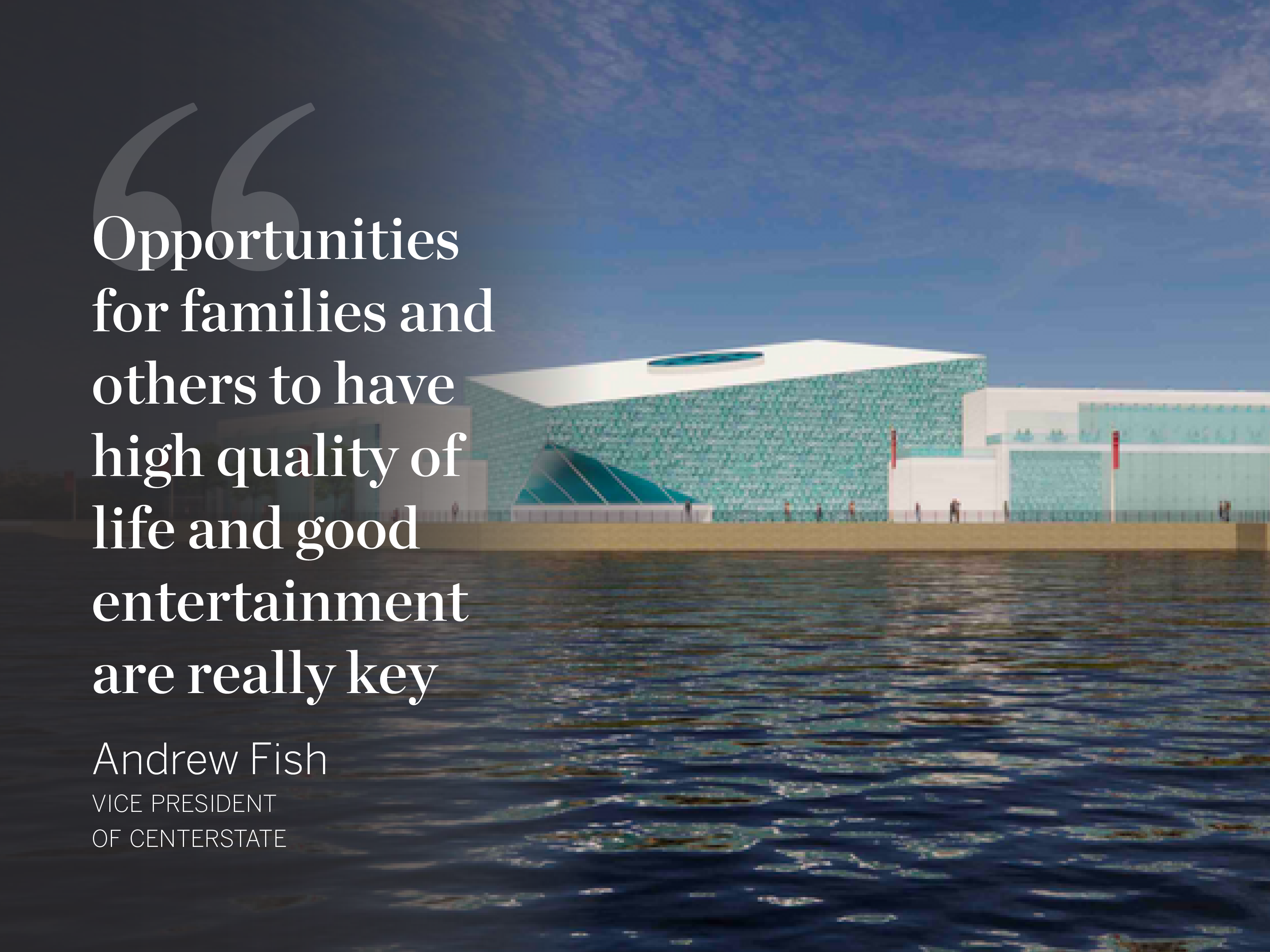 CenterState CEO, the local business development board, also believes the aquarium can continue growth trends in the city by bringing more tourism revenue, said Andrew Fish, vice president of the board.

“We need to really invest in things that will help us continue to be a growth community and amenities like (the aquarium),” Fish said. “Opportunities for families and others to have high quality of life and good entertainment are really key.”

While McMahon was clear about his support for investing in local infrastructure and social programs, he said that as the pandemic is winding down, the aquarium supports the struggling leisure industry, which hasn’t received the same attention. The aquarium also doubles down on the county’s commitment to Onondaga Lake, he said.

“It’s continuing the tradition of investing around our lake that we spent over a billion dollars on to turn the lake into the epicenter of recreation and leisure activity,” McMahon said.

Legislator Mary Kuhn and other opponents to the project want to spend the county’s surplus on infrastructure and social services, which she said could supplement American Rescue Plan funds the county received in 2020. Activist group CNY Solidarity Coalition organized a petition to stop the aquarium, which has garnered over 800 signatures.

“This is absolutely not the way we should be spending the county’s money when we have more pressing issues,” Kuhn said. “We need to make this an attractive place for people to live. Infrastructure, water, sewers, roads, sidewalks – There’s plenty of things for us to do.”

Kuhn worries the aquarium brings too much risk along with it, especially given that it’s a publicly funded entity.

“The $85 million is just the beginning. We don’t know how it’s going to be spent,” she said. “Suppose it goes over well, suppose it doesn’t do as well. The taxpayers are going to be on the hook for this in perpetuity.”

“It’s a lot of money and I think we’re putting a lot of eggs into one basket,” Ryan said. “When it comes down to it, I think what we were shown from the county executive’s office, the number of visitation is high, and we have to make that just to break even… I’m really apprehensive.”

This is not the first time an aquarium has been proposed for the city, or even the Inner Harbor.

Private developers proposed an aquarium in the early 1990s in nearly the exact site of McMahon’s project, but the plan fell through as the developers could not raise enough capital. Designers for Destiny USA mall, then Carousel Center mall, also proposed a small aquarium attraction in the late 1990s, which similarly amounted to nothing.

“This is the third iteration of an aquarium. Why did the other two go down? Private money,” Kuhn said. “Business people were concerned it was not going to do well.”

McMahon hopes the Onondaga County Aquarium will follow the same trajectory as an aquarium in Chattanooga, Tennessee. Although local lawmakers turned down the Tennessee aquarium at first, private investors paid to build it, and it helped the city out of an economic downturn.

“I went to the aquarium in Chattanooga. It’s a world class aquarium, and I looked around that community and I thought to myself, just in the immediate vicinity, this is something that can be really impactful,” Fish said. “Certainly the economic driver can be there and I see (an aquarium) as a great opportunity for us.”

Keith Sanford, the president and CEO of Chattanooga’s aquarium, said it is the largest draw for tourism in the city, but acknowledged that the aquarium’s private funding minimized the risk for taxpayers.

“When you have a local population as well as tourist traffic, and then some business people, the restaurants flourish. The coffee shops flourish,” he said. “It’s just good for everybody.”

After the legislature tabled the first aquarium vote in December, McMahon and Rowley have continued discussing the project, and intend to bring it back to the legislature this summer, they said.

“There’s other (legislators) that are, for political reasons, just never going to support it. I understand that. And I understand that a lot of people are in opposition to this,” McMahon said. “But overall, I think we’re getting closer with the legislators.”

Apple users Have you subscribed to Apple News? Want to know how to set it up to reflect the news you want to hear? I’ll

TRY TAILOR BRANDS (Use code katehayes30 for 30% off!) source

Learn more with our FREE SEO Tutorial for Beginners now: https://clickhubspot.com/pjv In this video we’re discussing SEO tips for … source

43% of small businesses are owned by women. Here’s how that breaks down in your state. |

[ad_1] Women have made significant strides in the entrepreneurial space in recent years. Currently, 43.1% of small business owners are women, according to the U.S.